Access : By tram : Trams 9, 15, 16 or any other tram running up the Plzeňská from Andel in the direction of Řepy or Kotlářka. Get off at Kotlářka and cross to the other side of the road, with the Kotlářka tram terminus behind you.

By car : possibility to park at the official entrance to Cibulka in the street Nad Hliníkem, then follow the path right up to the abandoned building and pick up the walk description from picture (2). To return to your car at the end of the walk, take bus 147 from bus stop Karlštejnská to the second announced Klamovka stop (the first is a znameny, meaning that you have to indicate to the driver by pressing the stop bell that you wish to get off) Then take the 9 tram from Klamovka to Poštova in the direction of Řepy and you will find yourself opposite the street where you parked earlier.

Tips : Your dog will have access to water once, near the beginning of the walk.

Description : Get off tram 9, 15, 16 at tram stop Kotlářka and cross the road (not to the side of the tram terminus). Take the forest path going up to the right just beside the steps. When this path emerges onto V Brizkach, keep going straight on, as the path picks up again as you get to the garages. At the top of the path, do not turn towards the road but take a sharp right, along the wall and follow the path until you arrive at an opening, revealing a large grassy area. This is the Cibulka domain. The abandoned building in a sorry state of disrepair behind the iron gates was for several years, one of Prague’s biggest squats, housing around 10 squatters until they were evicted in May of 2015 in a rather controversial police intervention involving water canons. Years ago, when we used to arrive here, a couple of dogs would run out, unsure whether to greet us or eat us, but after a few months they got used to our unusual entrance to the domain. (Generally, visitors enter via the long tarmac road which you can see below you). Long before it was inhabited illegally though, at the beginning of the 19th Century, this building was known as Zámeček Cibulke, Cibulka Manor, and was owned by Bishop Leopold Linhart Thun. The chinese pavillion, Činsky pavilon, (1)

a listed building which you can see (at present in dire need of restoration) over to your right beyond the children’s play structure, was built during his ownership (1817-1826), as was the tower and gothic castle ruins as well as other statues which you will see as you walk, dotted round the park. The statues depict Zeus, Cronus the Titan King and Diana the Huntress. The domain dates back further in history however and according to Prague registers of the surrounding villages which only became part of Greater Prague in 1922, the cadastral territories of Košiře and Motol were first mentioned in 1185. In the Medieval era they belonged to the church and Royal Chamber but during the reign of Charles IV, on this domain, there were supposedly established vineyards belonging to his head cook. You must take the path which runs along the green fence of the derilict building. (2) 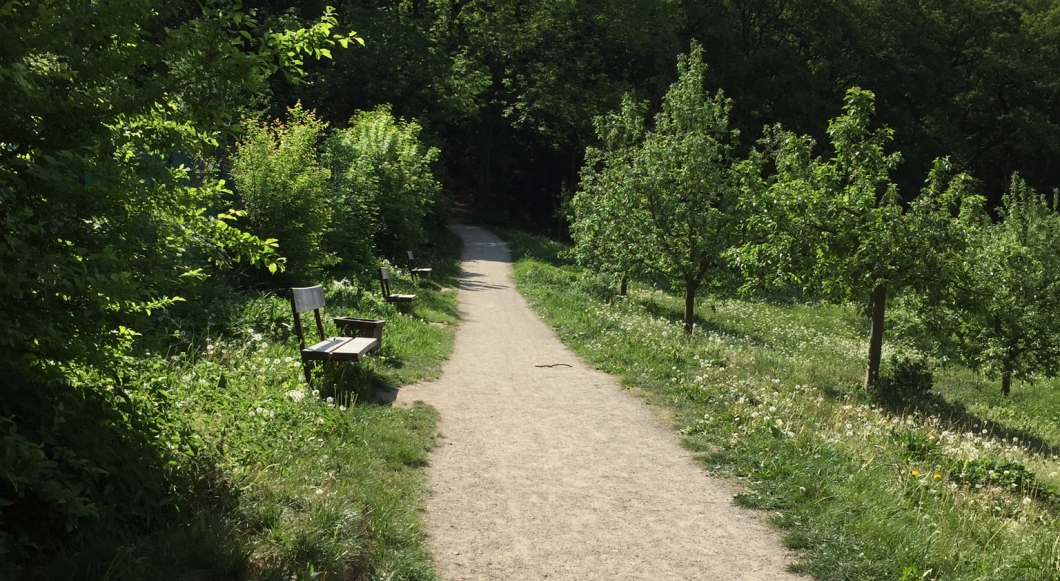 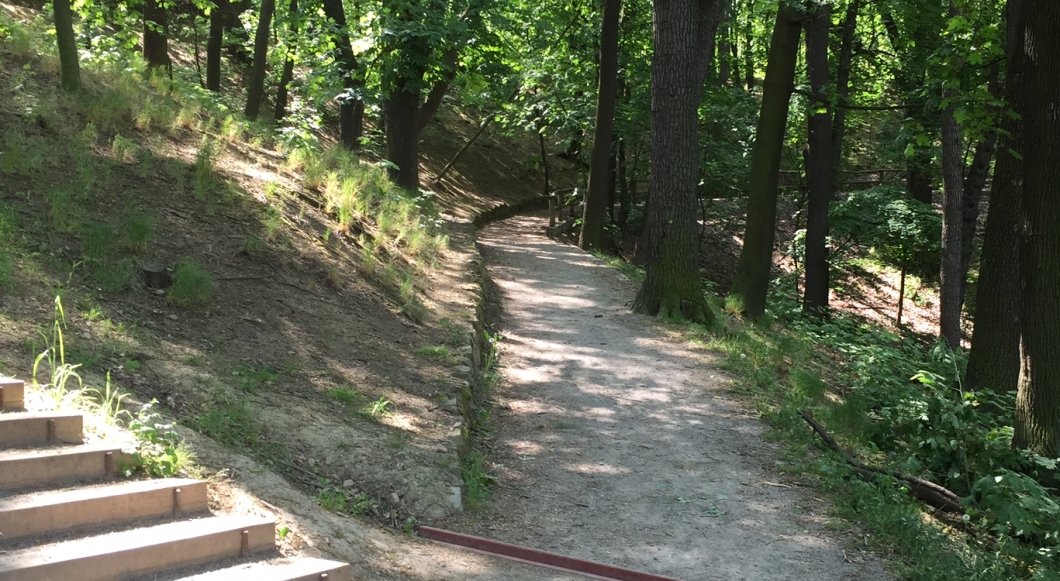 and presently you will come to the tower. Closed for a couple of years, the tower is now usually open and you can climb to the top where there is a very bautiful view which I particularly enjoy in Autumn. (4) 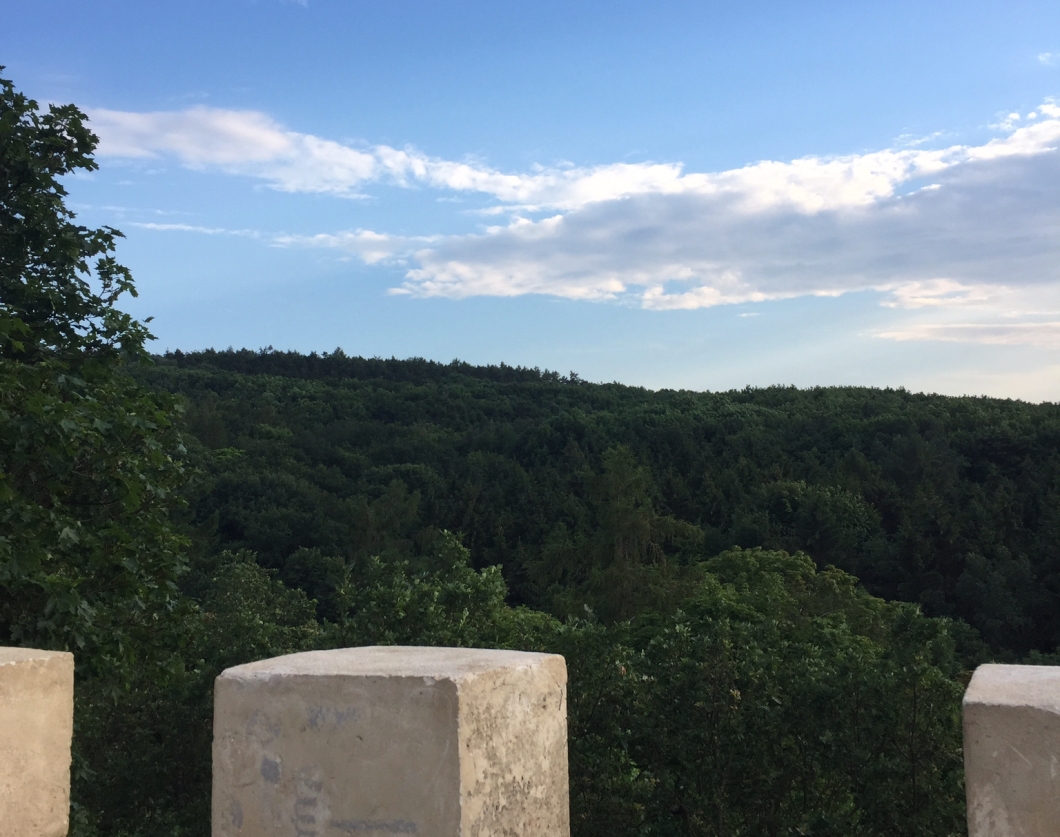 Your dog can go up with you as it’s perfectly safe however his/her view at the top, will unfortunately be of a concrete wall 🙂 After visiting the tower, take the steep steps downwards in order to glimpse the statue of Cronus and take in the atmosphere of the pseudo gothic ruins. (5) Although artificial looking, it is a peaceful place to sit, all year round. Now follow the path down towards the wooden picnic shelter and cross the little bridge at the pond. (6) Here, your dog can have a drink, though the water is clearer in the little stream to the right. My dogs often enjoy a quick swim in the pond but I hasten to add that the water is very muddy and they don’t smell particularly appealing afterwards. You will spot the statue of Diana beyond the pond to your left (7). She is depicted caressing two hunting dogs and I must confess that I had this somewhat bizarre photograph as my screen saver for about a year. Moving on ! At Pod Dianou information board, where you can compare today’s surroundings with thise of the 1820´s, (8) 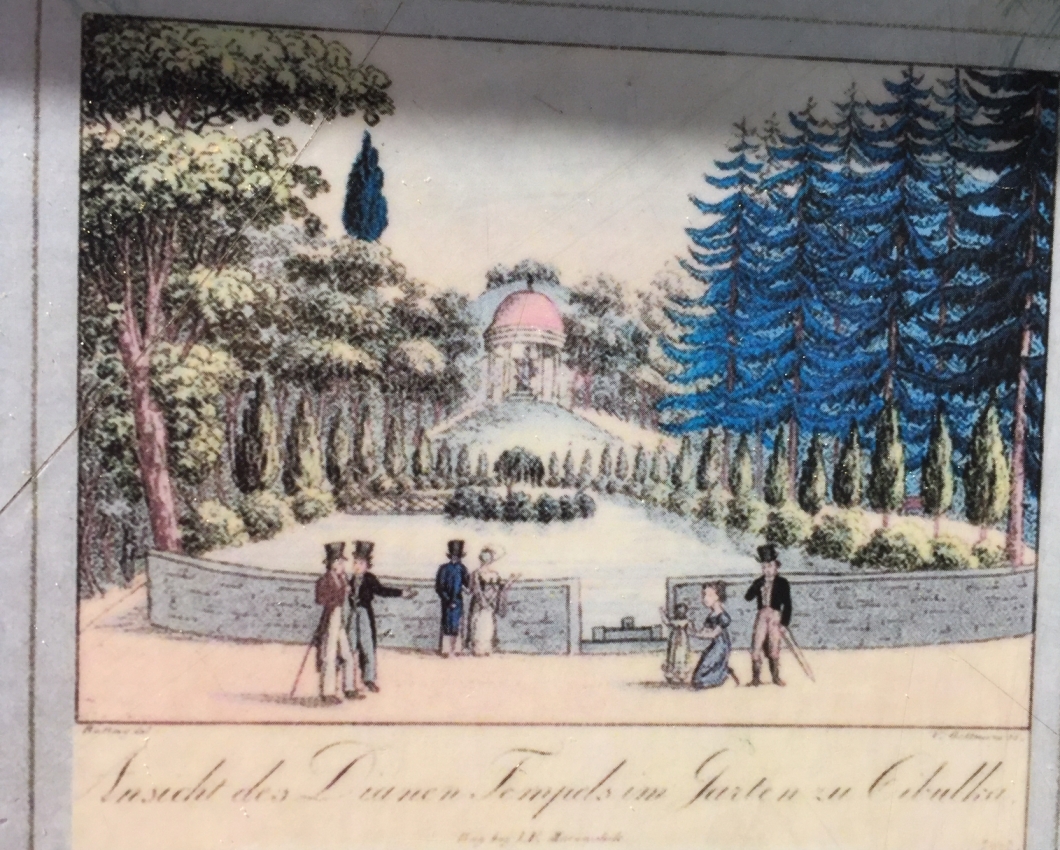 follow the path, lined with wooden fencing which goes round towards the right. At the end of the path, turn left. Put your dog briefly on the leash or walk briskly as you are about to cross railway tracks. (9)

Once over the tracks, follow the wide, tarmac path round to the right until you reach the wooden shelter. (10)

Here, you must turn right but after only a few meters, you will take a path leading sharply up to the left. This path leads up to a field but you will turn right into the forest before then, where a minor path crosses your path (11).

As you come out of the trees, this path heads up towards the left and you will cross the end of a cultivated field (12), coming out onto a tarmac area. Go right and keep looking out for the only place where the trees on either side touch overhead,(13)

as this indicates where you must take the very small path to your left. (14) 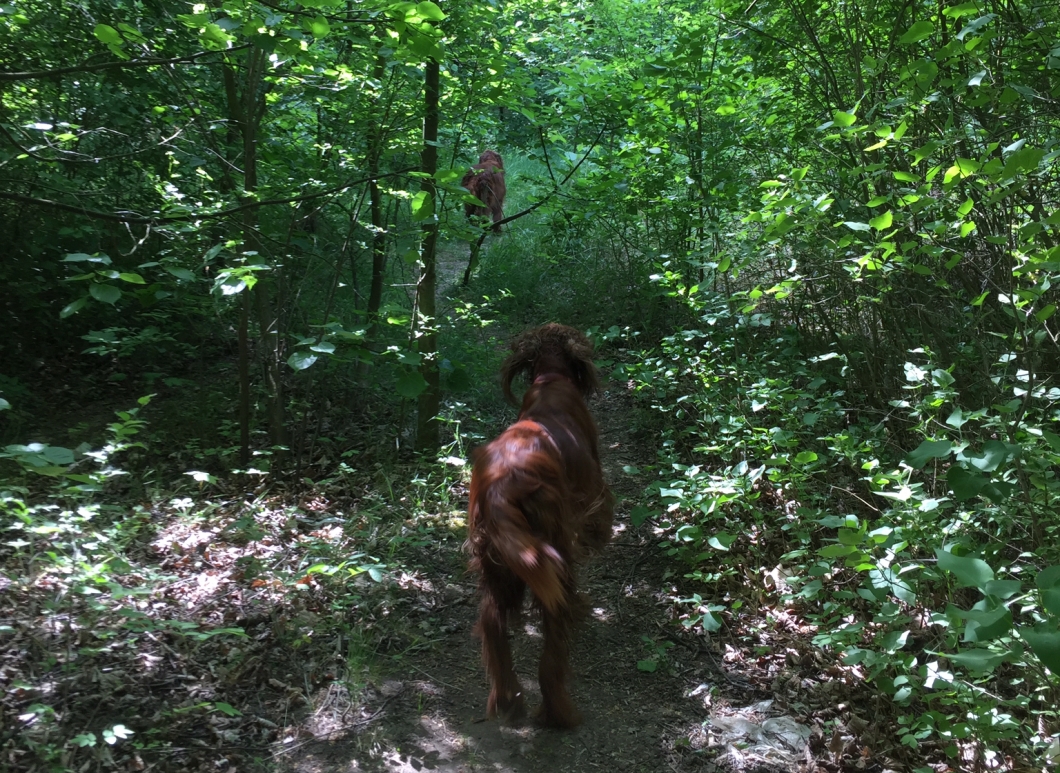 Cross the field, following the path (18) – my dogs love this field –

and when you reach the tarmac road, turn abruptly down the grassy path located immediately to your right (18).

Option 1 : The red building is the German School of Prague and you will follow the path bordering the school to the right if you wish to take the metro (yellow line) from Nove Butovice metro station. As you walk down the side of the school, your dogs will find a pond of clean water to drink. Access to the platform is via stone steps thus ideal for dogs. You should put your dog on the leash as you pass the school, as you must keep going straight on and cross a main road. The metro is located among the buildings in front of you, after crossing the road. Option 2 : If you prefer to take the bus, continue along the path sloping diagonally downwards (18), walking with the German School of Prague to your right. When you arrive at the road, there is a huge grassy field ahead which is ideal for a picnic before leaving nature. Otherwise, go left right to the bottom of Na Vidouli. At the bottom of this street, on your right you will see another old, listed building, Butovice Zamek (19). 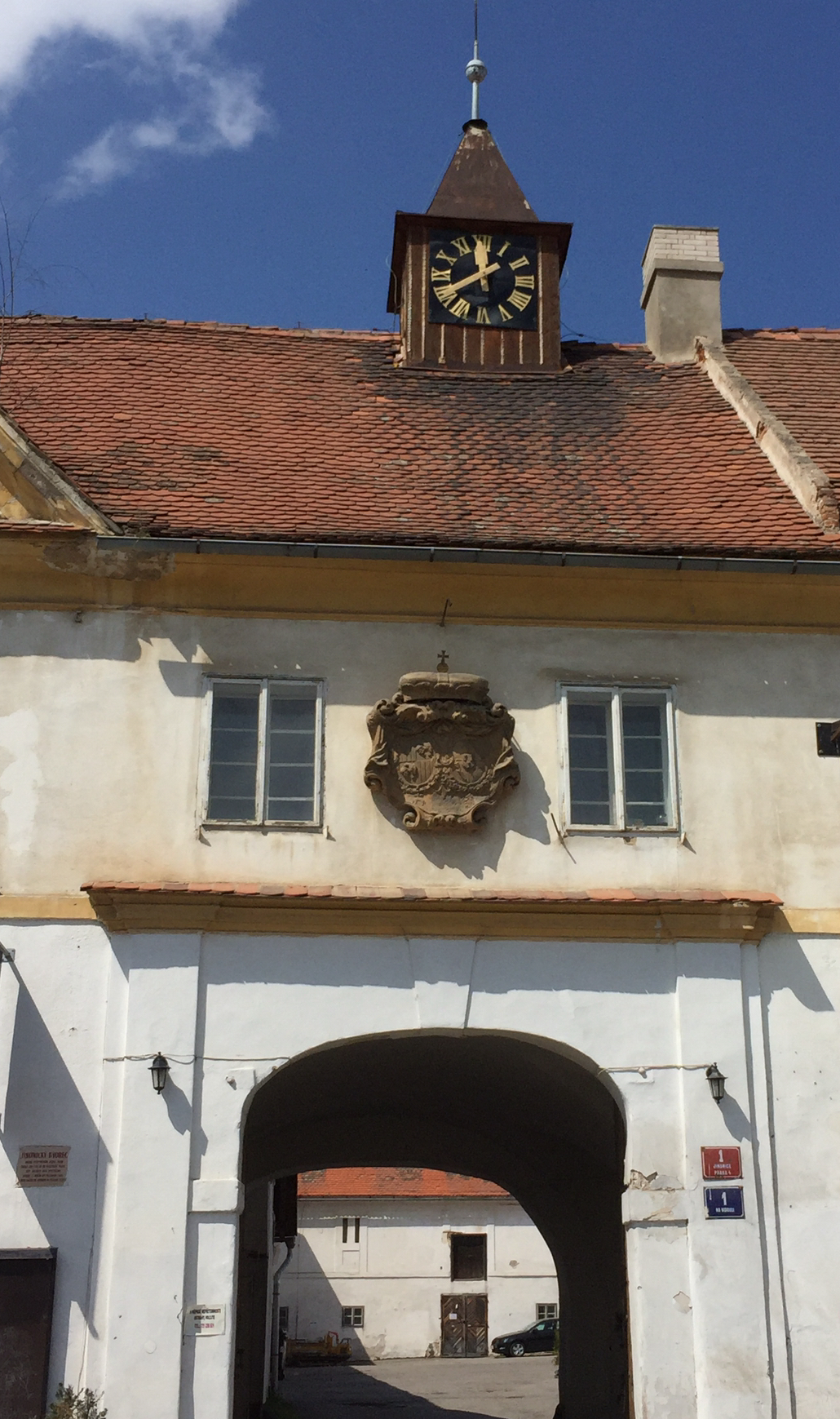 After the Thirty Years’ War (1618-1648) in Central Europe, the settlement of Jinonice was awarded to Pavel Michna of Vacinov, who founded the château. However later it was rebuilt by Jan Adolf Schwarzenberg and the family coat of arms is still above the entrance portal today. A plaque on the facade also informs us that Antonin Jaroslav Puchmajer was accomodated on the premises from April 1804 – Dec 1805.

Puchmajer gratuated from the Archbishop’s seminary in the Clementinum in Prague and also earned a philosophy degree from Charles University. He was ordained into the Catholic Church but as well as serving as a parish priest, he was a literary activist, founding the Poetry Association of Bohemia in 1791, which is also known as Puchmajer’s Society. The plaque on the wall also informs us that he was a linguist.

You have finished your walk so should you require a meal or refreshment before getting onto the bus, there is a small restaurant in the street opposite U Jinonického rybnicka called Dana Majerova and another one along to the left next to the veterinary clinic, Restaurace Nova Hospoda. The metro is located round to your right, across the first road and up the little path to your right. From Zamek Butovice, the 179 bus stop is just on the other side of the road, a few meters to your left.

We hope you have enjoyed your walk.