46 – Trails of the Czech koruna

As Apple Pay and the likes grow in popularity, it is perhaps true that we handle our country’s banknotes less than we used to, nevertheless, these bills, often issued by one central bank, remain an important feature of a nation’s identity. Likewise, those honoured on the banknotes are commemorated for accomplishments which have contributed to the creation of their nation: the nature of their deeds, as well as the domains they represent, often give us insight into the things to which a country assigns value.
Since the withdrawal of the 20 koruna note in 2008 and the 50Kč banknote in 2011, the Czech Republic’s currency; the koruna, or crown, consists of banknotes worth 100Kč, 200Kč, 500Kč, 1000Kč, 2000Kč and 5000Kč and showcases an admirable range of individuals and disciplines ranging from an opera singer, a philosopher and statesman, a teacher, a novelist, a historian and politician, and a king!
I have concocted the following six beautiful hiking trails by zooming in on one fragment of the life or work of each person, commemorated on the banknotes.

Tomáš Garrigue Masaryk was a politician and philosopher who is celebrated as the most prominent person of the Czech resistance, who during exile with Beneš and Štefánik, persuaded the allies of the necessity of change in Central Europe and the disintegration of the Austro-Hungarian empire. He returned to his country in 1918 as the first President of a newly emerged, independent Czechoslovak Republic.

Masaryk was born into a modest, working class family, grew up in Čejkovice, went to school in Brno, earned a Ph.D. from the University of Vienna, married Charlotte Garrigue while studying in Leipzig, whose surname he adopted, returned to Vienna until 1881 and then moved to Prague where he was appointed professor of Philosophy. The trail that I am dedicating to him however, takes us to Lány, a mere 30 minutes drive from Prague, and zooms in on a fragment of his life, as the first President of an independent Czechoslovakia. Chateau Lány, originally a small hunting chateau, built for Rudolph II in 1592 and transformed through the centuries, was bought by the state, to serve as the summer residence of T.G. Masaryk. He loved Lány castle and when he abdicated in 1935, he was permitted to continue to live there permanently with his family. Masaryk died two years later and is buried here, in Lány cemetery, alongside his wife and family.

Access: Drive to Lány and park free of charge, at the starting point.

Detailed itinerary : Follow red trail markers across the road and into the forest. After passing two small lakes on your left hand side where most visitors end their walk, the trail becomes more isolated and wild. After the long, gentle climb, keep following the red markers straight on, into the bushes, on a much narrower path. This path borders the vast Lány Game Park which is alas fenced off and non accessible to the public. Somewhere inside, is located the so called “Agreement oak tree”, under which the “Little Entente” was signed in 1922. When you arrive at the road, you can walk round the back of the house between two fences, to avoid walking along the road then as you turn right, red trail markers will resume, leading into a vast field. When you arrive at Nové mýto (if you are walking with children and wish to reduce the circuit by approximately 3Km, turn left, following yellow trail markers until you join up with the blue trail, https://mapy.cz/s/kovafapafe. Otherwise,) keep going on the red trail. However, you will leave the red trail markers when your path passes close to a main road and is intersected by a cycle route, running perpendicular to your path. Go left and cross the main road then walk straight on, through the vast field, Na Bukovkách, with a minor road on your right. You will reach a track, bearing blue trail markers, which you will follow, going left.

Then, at Na Bukovkách, follow the blue trail markers on a surfaced path and take the first wide dirt track, branching off to your left. Follow this track straight on past a caravan, then as you continue straight on, the path becomes very narrow and you will emerge into another vast field. Cross the field diagonally, towards the road and furthest corner of the field to arrive at Ploskov. Then follow the blue trail markers up the path to your left but only to the end of the first field. Where the field ends and the forest starts, you will find piles of logs, and behind them, a pretty, narrow path, on your left, bordering the field, which will lead you back to the solitary house you passed earlier, on the main road. From there, simply backtrack to the starting point, following the red trail markers back into the forest.

Here is the link to my full circuit : https://mapy.cz/s/fedopelaze

Before leaving Lány, you may like to take a peep through the heavily guarded gates of Lány castle, stroll through the majestic park (possible from the Saturday preceding Easter), visit the very sobre grave of T.G. Masaryk which has become a symbol of democracy, or drive past the nearby villa Amelia where government meetings are held. The most recent, I believe, dates back to just a few days ago, where the decision was made to relax COVID confinement rules slightly, before the start of the Easter weekend.

As you are leaving Lány, after driving past the museum (pictured above), the cemetery, which is always open, is located in the very last street to the left, just before the roundabout.

You can purchase our guide book here🔗 https://dogwalksprague.blog/prochazky/

After using our materials we would love to have your feedback. Please scroll down to the reply section and leave your comment to assist other hikers. Cheers!

The 100 Kč note bears the face of The Father of Bohemia and Holy Roman Emperor, Charles IV.
Most rulers and their accomplishments will elicit mixed opinion in popularity polls but showing approval of Charles IV in the company of Czechs, is a safe bet. Indeed, not only is he idealized as one of the most noteworthy rulers, presiding over the whole of Europe, he is also celebrated as a founder and developer. His imperial coronation in Rome made him the figurehead of Christendom but it was his birthplace, Prague, which he chose as his seat and residence, founding the university in 1348 and the New Town in 1348. There are few places one can explore in the Czech Republic, without stumbling upon links to Charles IV but the two hiking trails I propose, zoom in on two very different periods of his life.

He whom we all know as Charles IV was born in Prague in 1316 and in fact, spent the first years of his life under the name Václav (Wenceslas). He was the first son of King Jan of Luxembourg and Queen Eliška whose union brought together both the Luxembourg and Přemyslid dynasties. However there was much violent discord between the parents, to the extent that when King Jan suspected his wife of plotting to overthrow him, she fled to Loket with their son. Jan cunningly gained entrance to Loket castle, separated mother and child, banished his wife miles away, to Mělník, and imprisoned the boy of 4 in Loket for months, in very harsh conditions. 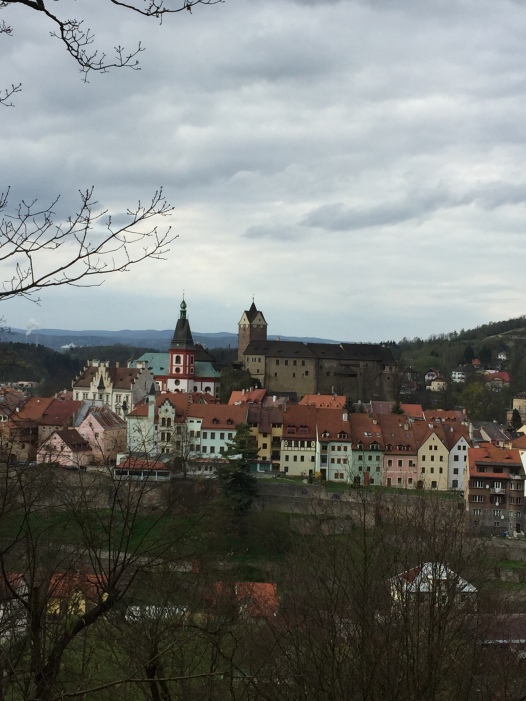 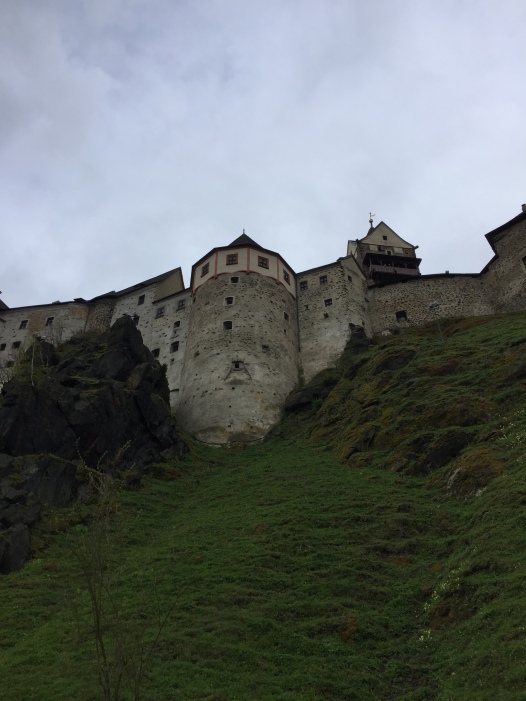 Tips: If you drive to Loket from Prague, you may wish to spend the night there and also do a longer hike. You can find tips for dog-friendly accommodation as well as instructions for a fabulous 20 Km hike in the book Dog Walks Prague, hike # 37. You can also access a full photo gallery on the blog article “Loket to Karlovy Vary”.

Detailed itinerary : Standing in the main square, facing the hotel Bile kůň, descend all the steps located to the left of the buildings and cross the river, then road. Follow the green trail past the little waterfall and up the slope. Your dog can let off steam in the huge fields to the left of the path. 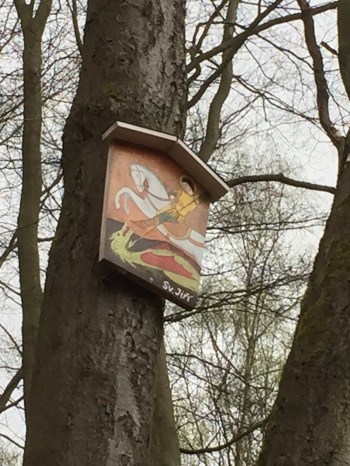 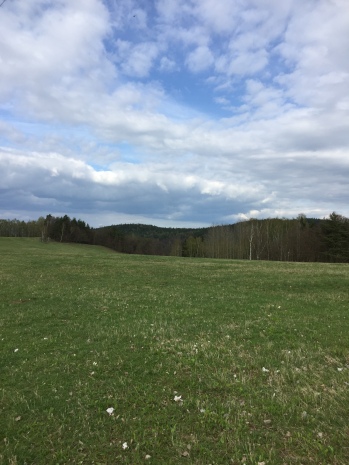 Continue to the village and follow the trail through the field, going right. Keep on following this beautiful trail across open field and then down into the forest, to emerge further along the road you crossed at the beginning of your walk. Go left towards the bridge, to return to the centre. You can go down to the river and walk along the bank to avoid the road. Here is the map link to my circuit : https://mapy.cz/s/cobovumugu

Quite evidently the trauma experienced during his formative years did not go on to define him in any negative way. Charles IV become a powerful and respected ruler. The second hiking circuit that I have concocted in relation to the 100 Kč banknote zooms in on the period of his life where he stood at the helm of Europe, and leads us to a castle he purchased and donated to his younger brother Jan Jindřich (John Henry), and his descendants. A document dated the 3rd of June 1359, states that Charles IV thus intended to offer his brother “a convenient opportunity to linger nearby and take part in government meetings and court festivities in Prague.” (“pohodlnou příležitost prodlévat v jeho blízkosti a aby byl účasten i vládních porad ai dvorských slavností v Praze.”) Charles’ brother, John Henry, lived here until his death in 1375. This well-guarded castle of astonishing beauty, is Zámek Koloděje. 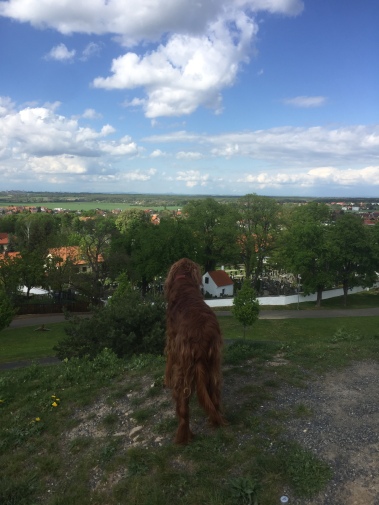 Park near St. Margaret’s church in K Markétě, Hájek U Uhříněvsi. Exercise caution driving to the starting point as this very narrow street also serves as a cycle path. To the left of the church, cross the field, following an unmarked but well-trodden path heading diagonally towards the gap in the trees and fields beyond. Follow the path past the mirador then left, along the edge of the next field. You will have a view over vast agricultural fields to your right and will spot a lake to your left. There is a very steep path which goes down towards the lake should your dog like swimming. You will then need to climb back up to the path again.

Continue along this path then down to the left towards a stream with a wooden bridge. Do not go as far as the bridge, rather, locate the narrow path going right, just before a rather dilapidated wire fence. Keep following this path through forest then field (never crossing the river) and you will come to a corral, enclosing a herd of of the most elegant horses.

Take the path going straight on, with the corral to your left. Keep going straight on and when confronted with choices, keep following the path which climbs gently and veers only slightly towards the right. You will emerge on a wider path, with fields on both sides and the wall of the extensive Zámek grounds over on the far left. Go straight on until you join up with a wide path bordered by young trees, bearing red trail markers. Go left then climb the mound to the wooden sculptured monument. 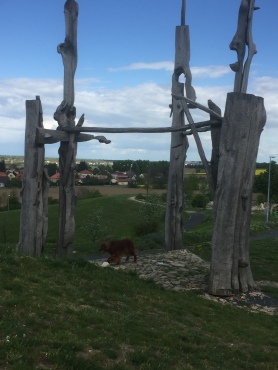 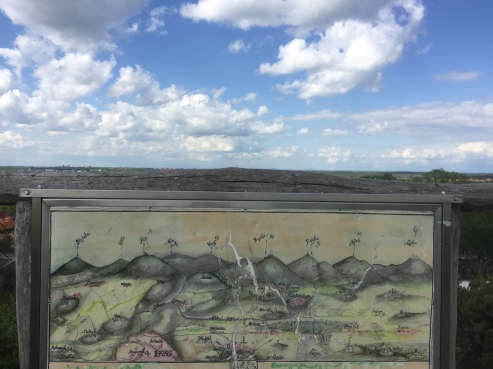 From here, if you wish to see the Zámek (alas only possible from the gates) you can walk down the little lane to the left of the cemetery and weave your way through the residential streets towards the left. The castle grounds are guarded and if you approach the gates to try to peer into the courtyard, a courteous but stern guard will ask, via the intercom, if he can help you…

Here is the map:

It is possible to purchase our guide book here🔗 https://dogwalksprague.blog/prochazky/

After using our free material, we would love to have your feedback. Please scroll down to the reply section and leave your comment after your hike, to assist other users. Cheers!